Mary Shelley's 'On Ghosts' (Featuring the King of the Cats) 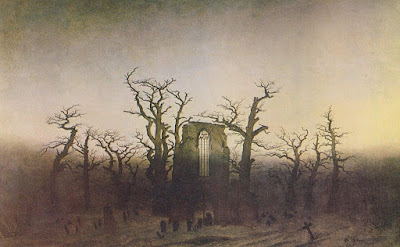 I look for ghosts - but none will force
Their way to me; 'tis falsely said
That there was ever intercourse
Between the living and the dead.

William Wordsworth, 'The Affliction of Margaret' (1807)

As a big fan of the Gothic, I do like to read a spooky poem or two on Halloween. The Romantics wrote plenty of dark, ghostly, and eerie verses; some old favourites of mine include Wordsworth’s ‘The Vale of Esthwaite’, Coleridge’s ‘Christabel’, Blake’s ‘Fair Elenor’, Keats’s ‘The Eve of St Agnes’, and, of course, Byron’s 'Darkness'. For something a bit more off the beaten track, I’d really recommend M. G. Lewis’s Tales of Wonder, and P. B. Shelley’s youthful attempts at Gothic poetry featured in Original Poetry by Victor and Cazire are good fun (if rather silly at times!).

Today, though, I’m going to be re-reading Mary Shelley’s ‘On Ghosts’, an essay that was printed in the London Magazine in March 1824. In this piece, Mary laments the lack of mystery and wonder in modern times, explaining that the ‘strange tales’ believed by our forefathers are no longer seen to be part of reality in our wiser age:

What has become of enchantresses with their palaces of crystal and dungeons of palpable darkness? What of fairies and their wands? What of witches and their familiars? and, last, what of ghosts, with beckoning hands and fleeting shapes, which quelled the soldier’s brave heart, and made the murderer disclose to the astonished noon the veiled work of midnight?

Mary proceeds, however, to question whether we really don’t believe in ghosts in our modern time. Granted, she explains, it is easy to dismiss the possibility of spectres in the light of noon-day; but at midnight, in a lonely house with flapping curtains and a dusky passage, when reading about the Bleeding Nun, we’re not so certain.

While Mary explains that she has never seen a real ghost herself, she relates the tales of Thomas Jefferson Hogg, who claimed to have seen the benevolent ghost of a recently-deceased friend, and Angelo Mengaldo, who saw the headless ghost of a companion who had killed himself after falling in love with a woman who did not return his passion. These tales may come across as rather far-fetched, but both men are presented as being reliable and of sound mind; Hogg is described as a person of ‘strong and virile intellect’, and Mengaldo is said to be ‘by no means addicted to superstition’.

The essay closes with a final account that Mary describes as ‘not probably so authentic [as the other tales], but perhaps more amusing’. The story, Mary explains, was told by M. G. Lewis, the famous author of The Monk. It is certainly a strange supernatural tale, but is it true? I’ll leave you to make up your own minds…

The King of the Cats

A gentleman journeying towards the house of a friend, who lived on the skirts of an extensive forest, in the east of Germany, lost his way. He wandered for some time among the trees, when he saw a light at a distance. On approaching it he was surprised to observe that it proceeded from the interior of a ruined monastery. Before he knocked at the gate he thought it proper to look through the window. He saw a number of cats assembled round a small grave, four of whom were at that moment letting down a coffin with a crown upon it. The gentleman startled at this unusual sight, and, imagining that he had arrived at the retreats of fiends or witches, mounted his horse and rode away with the utmost precipitation. He arrived at his friend’s house at a late hour, who sate up waiting for him. On his arrival his friend questioned him as to the cause of the traces of agitation visible in his face. He began to recount his adventures after much hesitation, knowing that it was scarcely possible that his friend should give faith to his relation. No sooner had he mentioned the coffin with the crown upon it, than his friend’s cat, who seemed to have been lying asleep before the fire, leaped up, crying out, ‘Then I am king of the cats;’ and then scrambled up the chimney, and was never seen more.


Posted by Catherine Redford at 00:43