As someone who spends her days working on a PhD about the Last Man on earth theme in Romantic literature, I’m always interested in predictions of the end of the world and the public reaction to them. From the Nostradamus prophecies and the fear of the Y2K ‘Millennium Bug’, both of which suggested apocalyptic scenarios occurring at the turn of the twenty-first century, to the American radio evangelist Harold Camping’s repeated predictions that the world will end (the last date given being 21 October 2011), it’s fascinating watching the varied responses from society, which range from scorn and ridicule to terror and hysteria, to these predictions of apocalypse.

The latest of these predictions surrounds the Mayan calendar, which ends on 21 December 2012; while scholars of Mayan culture assert that this simply marks the supposed dawning of a new age, many others have identified this date as (yet another) doomsday. Because of the mythical associations of the Mayan civilisation, accompanied by some bizarre internet rumours of extraterrestrial gods and the forthcoming collision of earth with the mysterious planet ‘Nibiru’, this prediction of apocalypse has really captured the world’s imagination. In 2009, the blockbuster film 2012 was released alongside a viral marketing campaign which allowed fans to register for a lottery number to save them from the forthcoming disaster, and in the past three years a number of new-age books and documentaries offering ‘evidence’ that the world will end on 21 December 2012 have appeared. Last month, the illusionist Derren Brown apparently hypnotised someone into believing that a zombie apocalypse had occurred for a two-part special aired on Channel 4, while a recent tongue-in-cheek marketing campaign from Lynx for its latest scent, ‘2012’, suggests that users ‘get it on for the end of the world’, demonstrating that the idea of an imminent apocalypse has well and truly entered popular culture.

Despite NASA assuring the masses that the apocalypse will not occur on this date, there have been various reports in the past few weeks of mounting panic around the world, from the Russians panic-buying survival supplies to Americans purchasing bunkers in which to sit out doomsday.

Apocalypse paranoia is, of course, nothing new, and the date I’m really interested in is 18 July 1816, given by the so-called ‘Bologna prophecy’ as the day on which the world would end. Widely known as ‘the year without a summer’, 1816 was an uncommonly cold and dark year: the coldest on record, before or since, in Western Europe, New England, and Quebec. The gloomy atmospheric conditions were, it later transpired, caused by the 1815 eruption of the Tambora volcano in Indonesia which had an impact on global weather systems for three years, leading to food riots and crop failure. British periodicals of the time were fixated with news of the freak weather conditions; the New Monthly Magazine and Universal Register, for example, reported that ‘[t]he cold wet weather throughout the whole of the last month, with the uncommon backward state of vegetation, has given a gloomy appearance to the country’, while the Scots Magazine and Edinburgh Literary Miscellany observed that ‘[f]or several months past, the foreign journals have been almost filled with lamentable accounts of the destructive effects produced in most parts of the Continent by the severe and tempestuous weather which has prevailed’.

Combined with a coincidental increase in sunspot activity in early 1816, these unusual climatic conditions were interpreted by many as a sign of the impending apocalypse, with the most famous prediction of doomsday being the aforementioned Bologna prophecy. Such predictions were widely disputed in the press; the Scots Magazine, for example, printed a substantial article charting the failure in the past of similar predictions to come true and explaining the science behind the sun’s activity. Many people were, however, nonetheless panicked, with a maid servant from Kennington reported to have committed suicide due to her fears about the approaching apocalypse.

Spending the summer in Geneva with Mary and Percy Shelley, Lord Byron experienced the gloomy weather first-hand, reporting in a letter to Samuel Rogers dated 29 July 1816 that ‘we have had lately such stupid mists – fogs – rains – and perpetual density’. Between 21 July and 25 August 1816 – that is, just after the passing of the date given by the Bologna prophecy –  Byron wrote ‘Darkness’, a poem about the death of the sun and the demise of humanity.

In this text, we encounter ideas of a dark atmosphere and growing despair as resources run low and men are compelled to compete for survival. Forced to burn houses as fuel, they resort to cannibalism before beginning to starve to death. When the last two inhabitants of a large city die, killed by their mutual hideousness, the world becomes ‘a lump of death’, without animals, vegetation, wind, sun, a moon, waves, or clouds. In the poem’s final, terrifying line, there is said to be nothing left in the universe but perpetual and all-consuming darkness. The poem was described as ‘any thing but pleasing’ by the Eclectic Review, which predicted that ‘few persons [...] will be inclined to read it twice’. So, as another doomsday passes us by, I give you the ultimate end-of-the-world poem for your reading pleasure: Byron’s ‘Darkness’.

I had a dream, which was not all a dream.
The bright sun was extinguish'd, and the stars
Did wander darkling in the eternal space,
Rayless, and pathless, and the icy earth
Swung blind and blackening in the moonless air;
Morn came and went--and came, and brought no day,
And men forgot their passions in the dread
Of this their desolation; and all hearts
Were chill'd into a selfish prayer for light:
And they did live by watchfires--and the thrones,
The palaces of crowned kings--the huts,
The habitations of all things which dwell,
Were burnt for beacons; cities were consumed,
And men were gathered round their blazing homes
To look once more into each other's face;
Happy were those who dwelt within the eye
Of the volcanos, and their mountain-torch:
A fearful hope was all the world contain'd;
Forests were set on fire--but hour by hour
They fell and faded--and the crackling trunks
Extinguish'd with a crash--and all was black.
The brows of men by the despairing light
Wore an unearthly aspect, as by fits
The flashes fell upon them; some lay down
And hid their eyes and wept; and some did rest
Their chins upon their clenched hands, and smiled;
And others hurried to and fro, and fed
Their funeral piles with fuel, and looked up
With mad disquietude on the dull sky,
The pall of a past world; and then again
With curses cast them down upon the dust,
And gnash'd their teeth and howl'd: the wild birds shriek'd,
And, terrified, did flutter on the ground,
And flap their useless wings; the wildest brutes
Came tame and tremulous; and vipers crawl'd
And twined themselves among the multitude,
Hissing, but stingless--they were slain for food.
And War, which for a moment was no more,
Did glut himself again;--a meal was bought
With blood, and each sate sullenly apart
Gorging himself in gloom: no love was left;
All earth was but one thought--and that was death,
Immediate and inglorious; and the pang
Of famine fed upon all entrails--men
Died, and their bones were tombless as their flesh;
The meagre by the meagre were devoured,
Even dogs assail'd their masters, all save one,
And he was faithful to a corse, and kept
The birds and beasts and famish'd men at bay,
Till hunger clung them, or the dropping dead
Lured their lank jaws; himself sought out no food,
But with a piteous and perpetual moan,
And a quick desolate cry, licking the hand
Which answered not with a caress--he died.
The crowd was famish'd by degrees; but two
Of an enormous city did survive,
And they were enemies: they met beside
The dying embers of an altar-place
Where had been heap'd a mass of holy things
For an unholy usage; they raked up,
And shivering scraped with their cold skeleton hands
The feeble ashes, and their feeble breath
Blew for a little life, and made a flame
Which was a mockery; then they lifted up
Their eyes as it grew lighter, and beheld
Each other's aspects--saw, and shriek'd, and died--
Even of their mutual hideousness they died,
Unknowing who he was upon whose brow
Famine had written Fiend. The world was void,
The populous and the powerful--was a lump,
Seasonless, herbless, treeless, manless, lifeless--
A lump of death--a chaos of hard clay.
The rivers, lakes, and ocean all stood still,
And nothing stirred within their silent depths;
Ships sailorless lay rotting on the sea,
And their masts fell down piecemeal: as they dropp'd
They slept on the abyss without a surge--
The waves were dead; the tides were in their grave,
The moon their mistress had expir'd before;
The winds were withered in the stagnant air,
And the clouds perish'd; Darkness had no need
Of aid from them--She was the Universe.

Posted by Catherine Redford at 01:24 No comments: 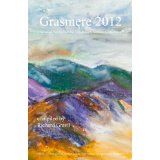 Back in August, I blogged about my time at the Wordsworth Summer Conference 2012, saying how much I'd enjoyed all of the papers and lectures during my ten-day stay in Grasmere. Twelve of these papers and lectures, as chosen by the conference delegates, are now available in Grasmere 2012: Selected Papers from the Wordsworth Summer Conference, edited by Richard Gravil. I feel really honoured to have my paper, 'The Last Man and Romantic Archaeology', included in the collection, and am very grateful to all of the conference participants who voted for it as one of their favourites.

There are some fantastic papers and lectures included in the book, and I'm looking forward to settling down for an afternoon over the Christmas holidays and reading them again. As always, the work of some really prestigious academics is included alongside papers by postgraduate and early career scholars and, as you will see from the contents below, the topics covered are fascinating.

The book is available in a range of formats: as a paperback, a PDF eBook, and a Kindle eBook. If you're after an eBook version, I'd recommend the PDF over the Kindle version; not only does it feature the thirteen illustrations in full colour, but it also has proper page numbers (and is therefore citeable) and produces substantially more revenue for the Wordsworth Conference Foundation, which in turn pays for postgraduate bursaries for future conferences.

Full contents:
Heather Glen, '"We are Seven" in the 1790s'
Judyta Frodyma, 'Lowth, Landscape, and the Biblical Echoes in Wordsworth's "Home at Grasmere"'
Pamela Woof, 'Dorothy Wordsworth, Writer: The Middle Years'
Suzanne Stewart, 'A Finely-Tuned Instrument: Dorothy Wordsworth and the Synaesthetic Experience'
Judith W. Page, '"The Lonely Hills": Beatrix Potter, William Wordsworth, and the Lakeland Landscape'
Heidi Thomson, 'The Lyric Power of Connection in Wordsworth's "Poem upon the Wye" and Auden's "In Praise of Limestone"'
Anthony John Harding, 'Contempt for the Reading Public? Coleridge, Wordsworth, and the Book Business'
Peter Swaab, 'The Poet and the Poetical Artist: Sara Coleridge as a Critic of Wordsworth'
Paul Whickman, 'From "Laon and Cythna" to "The Revolt of Islam": Shelley's Revisions in Context'
Catherine Redford, 'The Last Man and Romantic Archaeology'
Stacey McDowell, 'Keats's "Ode on Indolence"'
Jason Goldsmith, 'Re-Drawing the Borders of Vision; Or, The Art of Picturesque Travel'
Posted by Catherine Redford at 05:47 No comments: