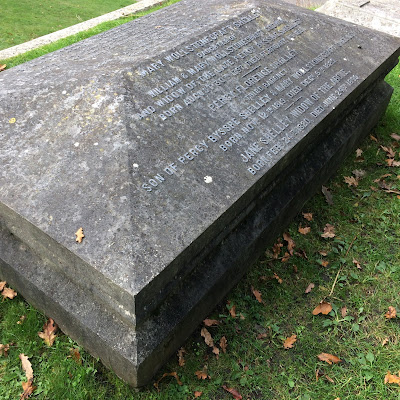 On this day in 1851 Mary Shelley died, her cause of death recorded as 'Disease of the brain Supposed Tumour in left hemisphere of long standing certified'. She had been suffering from headaches for some time before her death, and in December 1850 had started to experience numbness in her leg and speech impairment. By late January, nearly completely paralysed, she suffered a series of convulsions before falling unconscious. Nine days later, surrounded by her family, she quietly stopped breathing.

Mary was unafraid of death, and had made plans for her burial. She wanted to be interred with her parents - Mary Wollstonecraft and William Godwin - who were buried at St. Pancras in London. It was ultimately decided, though, that her final resting place should be in the more picturesque surroundings of St. Peter's in Bournemouth.

In order to honour Mary's wishes, her only surviving child, Percy Florence, and his wife Jane had the bodies of Godwin and Wollstonecraft exhumed and reburied in Bournemouth alongside Mary. The pair are commemorated on one side of the grave, with the inscription noting that they have been moved from their original burial place in London.

The other side of the grave commemorates Mary herself, with the inscription reading 'Mary Wollstonecraft Shelley, Daughter of William and Mary Wollstonecraft Godwin and Widow of the Late Percy Bysshe Shelley, Born August 30 1797, Died February 1 1851'. Percy Florence and Jane were also later added to the grave. Percy Bysshe Shelley had, of course, drowned back in 1822, and his body was cremated at the time on the beach in Italy due to local quarantine laws. Mary Shelley, however, supposedly kept the remains of her late husband's heart, and this is said to have been buried with Percy Florence when he was laid to rest in 1889.


The grave is surprisingly popular with tourists wanting to pay their respects to the author of Frankenstein; when I visited on a rather grey and wet autumn day last year, there was a steady stream of people coming to view it. The site of the grave is very easy to find, situated as it is upon a small slope not far from the entrance to the churchyard; the church itself very pretty, and is also worth a look while you're there.

As I wandered around the surrounding streets following my visit, I did have a chuckle when I came across the local Wetherspoon pub, which is aptly named 'The Mary Shelley'. It's not the most glamorous memorial, but at least Mary Shelley is being remembered and celebrated!


P.S. If you're interested in writers' graves, you might like to visit The Gravestone Project, which collects and explores data relating to eighteenth- and nineteenth-century graveyard cultures. The site features a separate section on 'Literary Graves', where you can view images of the gravestone that marks Mary Wollstonecraft's original resting place.

Posted by Catherine Redford at 12:55 No comments:

Although I started out my career exclusively as a Romanticist, I do now occasionally like to venture a little further into the nineteenth century. I’m particularly interested in dystopian and post-apocalyptic literature from the latter part of this period – texts such as Edward Bulwer-Lytton’s The Coming Race (1871), Samuel Butler’s Erewhon (1872), and M. P. Shiel’s The Purple Cloud (1901). My favourite late Victorian writer, though, has to be H. G. Wells. I remember first reading The Time Machine (1895) as a little girl and being utterly terrified of – yet also captivated by – the Morlocks. The ending of the novella still haunts me, and every time I reread it (which is usually every year) I find myself wondering what happens to the Time Traveller after he disappears for the final time at the end of the text.

One area that I’m researching at the moment is the fin de siècle afterlife of the Romantic ‘Last Man’ theme. Readers in the 1890s seem to have had the same appetite for tales of the Last Man on earth as earlier Romantic audiences, and Wells himself engages with the concept of the Last Man in texts such as The War of the Worlds (1897) and The Sleeper Awakes (1899), as well as in The Time Machine. Just as Romantic Last Man texts often respond to the concerns of their age – focusing on posterity, empire, and originality – so, too, does Wells use the idea of the Last Man to examine contemporary questions of science, class, and colonialism in his work. 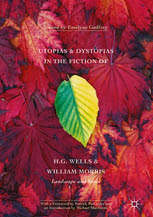 This little group of ‘Last Man’ novels by Wells is also united by a shared interest in underground spaces, and this is an idea that I’ve explored in an essay that has just been published in a new collection, Utopias and Dystopias in the Fiction of H. G. Wells and William Morris: Landscape and Space, edited by Emelyne Godfrey. In my essay, ‘“Great safe places down deep”: Subterranean spaces in the early novels of H. G. Wells’, I examine how Wells uses underground settings in his work to explore issues of class and power. He engages with both the old associations of underground spaces – which link the subterranean with the dirty and sunlight-deprived workers of the lower classes – and the new possibilities for progress that building beneath the surface of the earth offers. In Wells’s novels, I argue, the strict dichotomy between ‘above’ and ‘below’ is questioned as groups and species move between the two spaces and prompt shifts in the balance of power.

Of course, there are also plenty of subterranean spaces in Romantic literature, most notably in Gothic fiction. In works by writers such as Horace Walpole, Mrs Radcliffe, and Sophia Lee, underground tunnels and chambers hide all manner of secrets. Often dark, claustrophobic, and labyrinthine, these spaces reflect the fears and oppression of those who inhabit them. In Walpole’s The Castle of Otranto (1764), Isabella must enter a subterraneous passage beneath the castle in order to escape from the evil Manfred. Her terror at being followed is externalised in her underground surroundings: the doors shake on their rusty hinges as she passes by, and she thinks that she can hear footsteps echoing in the darkness of the passageway behind her. At one point she believes she hears a sigh, and the reader is left wondering whether this is merely the wind moving through the passage, the sound of Manfred in pursuit, or even the voice of the castle itself, which at times seems to live and breathe.

Often, underground spaces are associated explicitly with the (post-)apocalyptic, and this is certainly the case in The War of the Worlds when the artilleryman proposes that humanity should retreat beneath the earth’s surface following the Martian invasion. In the twentieth century, this prospect became all too real as subterranean fallout shelters were constructed the world over in order to provide protection from a possible nuclear attack. Given this link between the apocalyptic and the subterranean, I was interested recently to come across a seemingly rather unremarkable little pamphlet from 1799. The short text advertises itself as a ‘guide for sinners’, and relates the tale of two old men who were supposedly found living underground in Yorkshire. When questioned, these men warned that the end days are upon us; it seems that that the impulse to disappear underground at the threat of apocalypse goes back a very long way indeed! 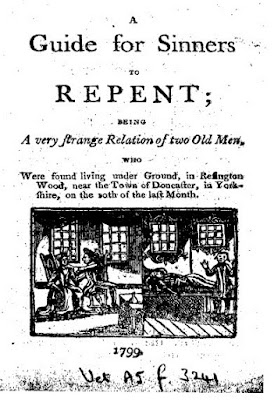 Utopias and Dystopias in the Fiction of H. G. Wells and William Morris: Landscape and Space, edited by Emelyne Godfrey, is published by Palgrave (£66.99) and can be purchased here.

Posted by Catherine Redford at 06:59 No comments: