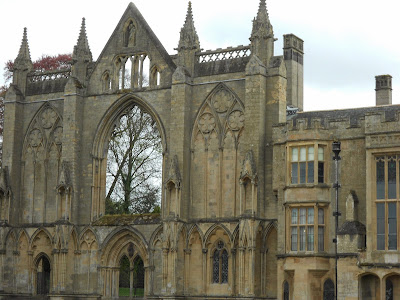 Through thy battlements, Newstead, the hollow winds whistle:
Thou, the hall of my Fathers, art gone to decay;
In thy once smiling garden, the hemlock and thistle
Have choak’d up the rose which late bloom’d in the way.

A couple of weeks ago, I headed up to Nottingham for the 11th Annual Newstead Abbey Byron Society Conference to give a paper on Byron’s ‘Darkness’. The conference theme was ‘Byron and the Bible’, and I heard some great papers by Gavin Hopps, Peter Cochran, Marina Ragaczewskaja, Peter Francev, and Emily Paterson-Morgan over the course of the day.

What made this conference really special was the fact that it was held at Byron’s ancestral home, Newstead Abbey. I’d never visited before, but I was familiar with all the stories that make this place seem so romantic and mysterious, from the cloisters and skulls to the ghost of the Goblin Friar. The Abbey certainly didn’t disappoint, and the fact that the weather was a bit gloomy and miserable made it all the more atmospheric as we approached up the long driveway in our minibus!

Newstead Abbey was founded as a monastic house in the 12th century, and was acquired by Sir John Byron from his patron Henry VIII following the dissolution of the monasteries. By the time that our Lord Byron inherited the Abbey, however, the house had fallen into disrepair. His great uncle William, the 5th – or ‘Wicked’ – Lord Byron, had lacked the funds to keep the estate in good order, selling off its timber and using the reception hall and refectory of the old Priory for storing hay.

Unable to restore the entire house to its former glory, Byron famously used to practise pistol shooting in Newstead Abbey’s Great Hall, and allowed his pet bear and wolf to roam the house. He decorated his study with skulls found within the Abbey’s grounds, and even had one particularly large skull polished and turned into a drinking goblet, a replica of which is now on display in the house.

It was great to have the chance to look round the house at the end of the conference, and I got to see some really interesting artefacts, including Byron’s boxing gloves! The Abbey houses an extensive art collection, and I particularly enjoyed seeing Thomas Phillips's famous 1813 portrait of the poet. Byron isn't quite such a heartthrob in all of the portraits on display, however, and looks decidedly less dreamy in the miniature painted by Girolamo Prepiani that is also on show at the Abbey! Other highlights of the collection for me were Amelia Curran’s portrait of Claire Clairmont and Clifton Tomson's paintings of Byron’s dogs, Boatswain and Lyon.

Anyone who has read Byron’s poetry will be familiar with the Gothic image of Newstead Abbey as ancient and decaying; from the early collection Hours of Idleness  (1807) to Childe Harold's Pilgrimage (1812-18) and Don Juan (1818-24), Byron’s work depicts the house and estate as a place of ruin and hauntings. I’m really glad that I finally got to visit, and certainly feel that I came away with a better understanding of Byron’s life and poetry having looked around the Abbey and its grounds. I’d highly recommend it as a place to visit, but don't just take my word for it; as the Gothic novelist Horace Walpole commented, ‘Newstead is the very abbey’.

Posted by Catherine Redford at 09:46 No comments: