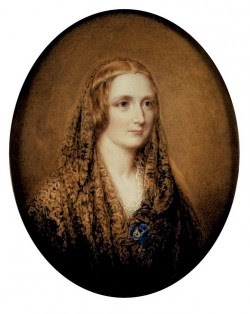 I can't say that I'm a regular reader of the Chelmsford Weekly News, but earlier this month I found my Facebook and Twitter feeds filled with links to an article in this publication concerning a very exciting discovery for Mary Shelley fans. While searching the archives at the Essex Records Office for information about an obscure nineteenth-century novelist known as Miss Crumpe, Professor Nora Crook (Anglia Ruskin) serendipitously came across a record for thirteen unpublished letters from Mary Shelley to Horace Smith and his daughter Eliza. Written between 1831 and 1849, the letters promise a fascinating glimpse into this period in Shelley's life.

These documents, Professor Crook explains, offer us an insight into Shelley's friendship with the Smiths, revealing her loyalty to the family alongside personal details about her son and her failing health. Shelley consults with Smith about one of Edward Trelawny's manuscripts, and asks if she can have permission to publish some letters written by her late husband, Percy Shelley, in which he expresses negative views about religion.

The letters will be published in a future edition of the Keats-Shelley Journal.

The original article from the Chelmsford Weekly News can be found here.

Posted by Catherine Redford at 09:55